These bat-eared, beautiful dogs have been a favorite for many years. Here is a complete overview of the breed including everything you need to know before buying one.

The French Bulldog originated in England. It was originally created to be a toy-sized version of the Bulldog. Back then, the breed was quite popular with lace workers in Nottingham in England. A lot of these lace workers decided to move to France for new job opportunities, naturally taking their Frenchies with them. 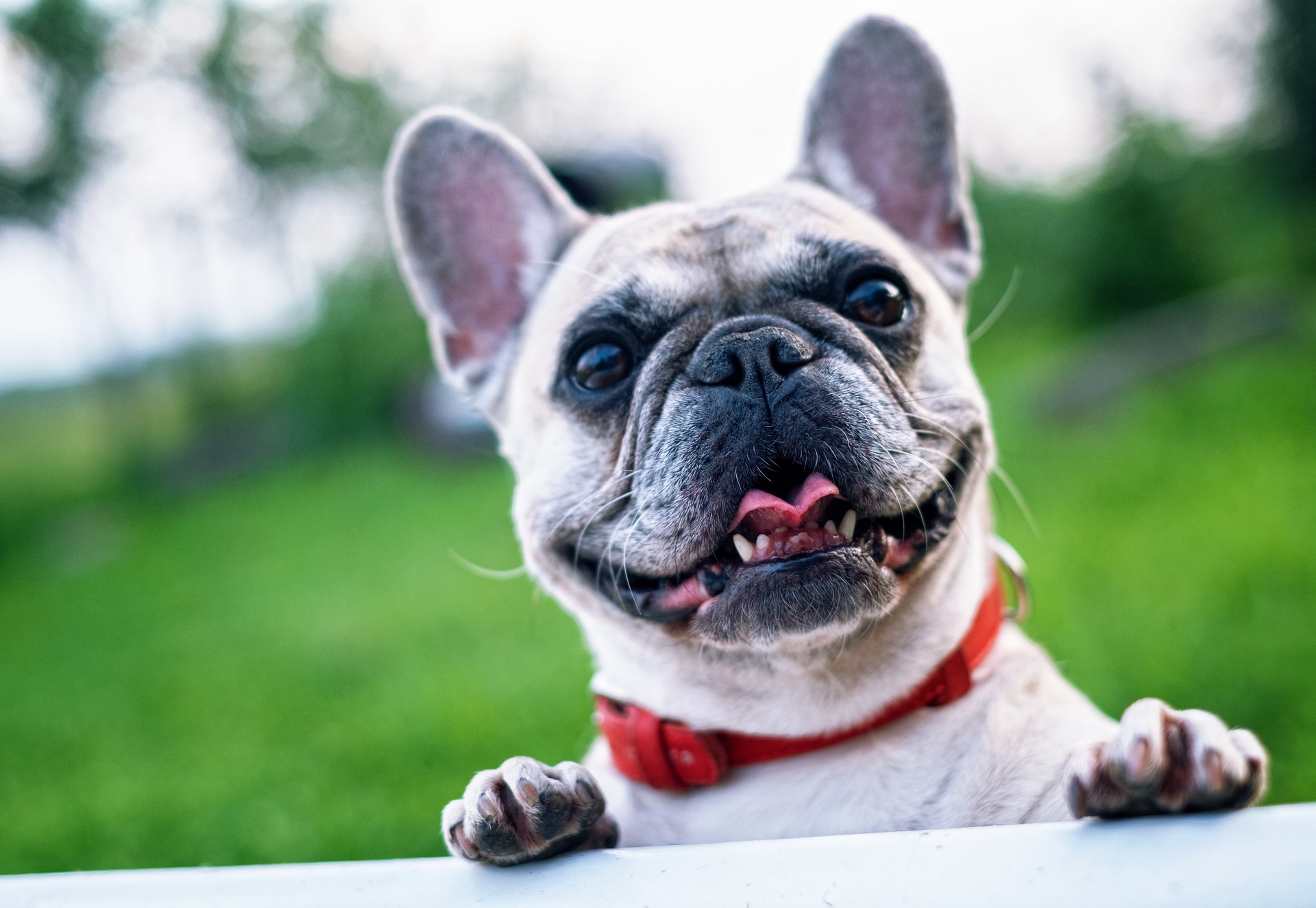 The breed began to thrive in France and spread around Europe. They were quickly given the nickname Frenchie and became the French Bulldog.

French Bulldogs come in multiple different colors, like white, fawn, brindle, fawn, black, and even some of these colors combined. They are usually around 11 to 12 inches tall, with the males being about 20-28 pounds and females being slightly lighter at about 16-24 pounds. They have a lifespan of around 10-14 years.

Every dog is different and has its own personality. But with most breeds, female and male dogs will have different personality traits and temperaments. 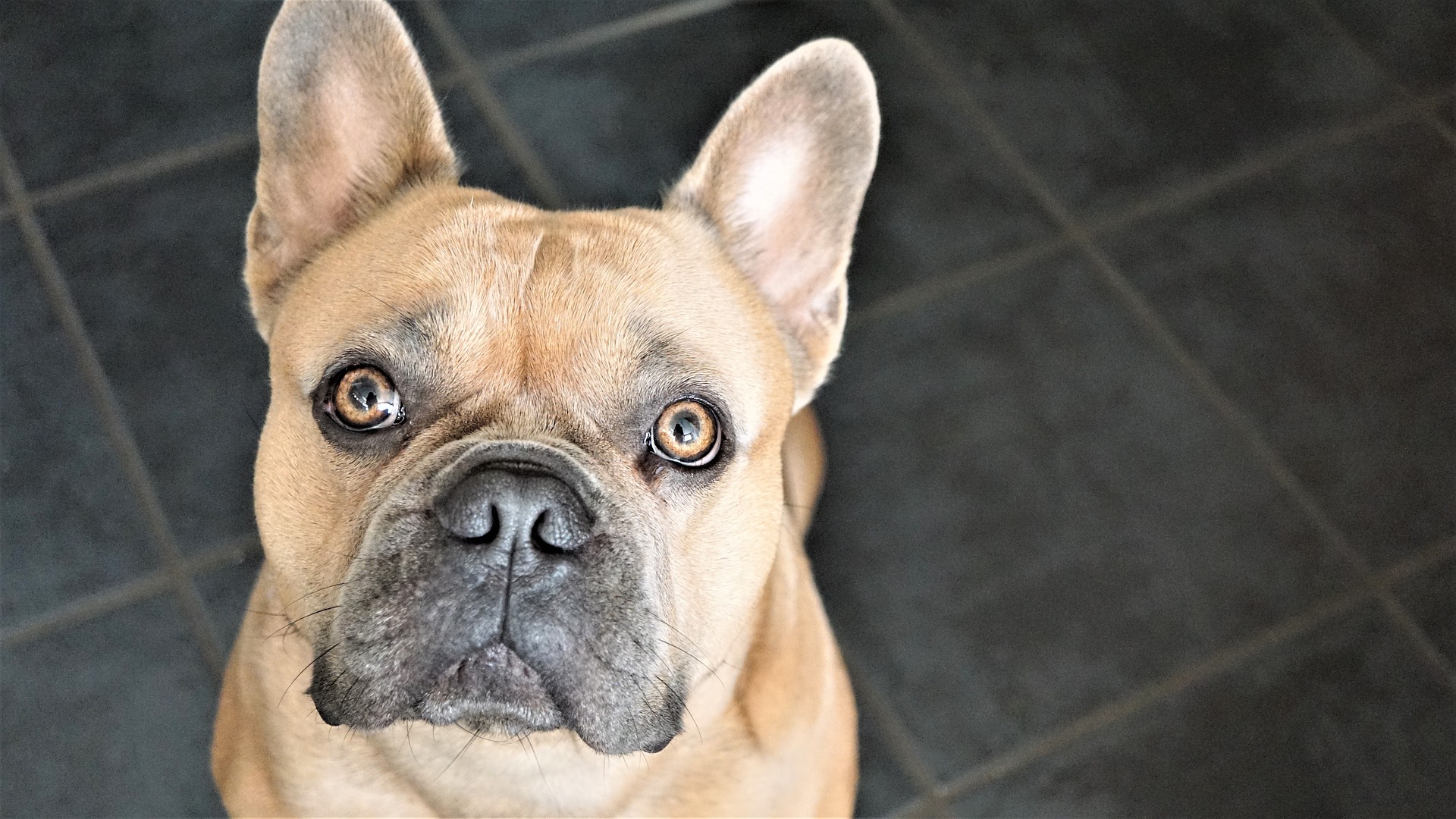 With the Frenchie, the males tend to be more playful and assertive, while females tend to be more affectionate and timid. If you’re looking for a dog to run around and play with you, a male may be more down your alley. If you’re looking for a cuddly lap dog with endless affection, a female may be more suitable. Although, keep in mind that females can be nippier than males. This can be corrected with proper training.

This doesn’t go for all French Bulldogs. You can get an affection, male lap dog. You can also get a playful female Frenchie. It is down to the individual dog itself, how it is brought up and how well it is trained.

Overall, both male and female Frenchies are great companion dogs and are very docile. They are very loyal to their owners and don’t get aggressive.

French Bulldogs have amazing little personalities. They all have their own characteristics which makes them unique. In general, they are very playful and loving dogs. They will follow their owner everywhere they go because they just love human attention and being around the people they love. French Bulldog owners tend to describe them as ‘big dogs in a small body. They are lively pups, but also love to relax and be lazy, which is great when you as the owner are settling down during the day. 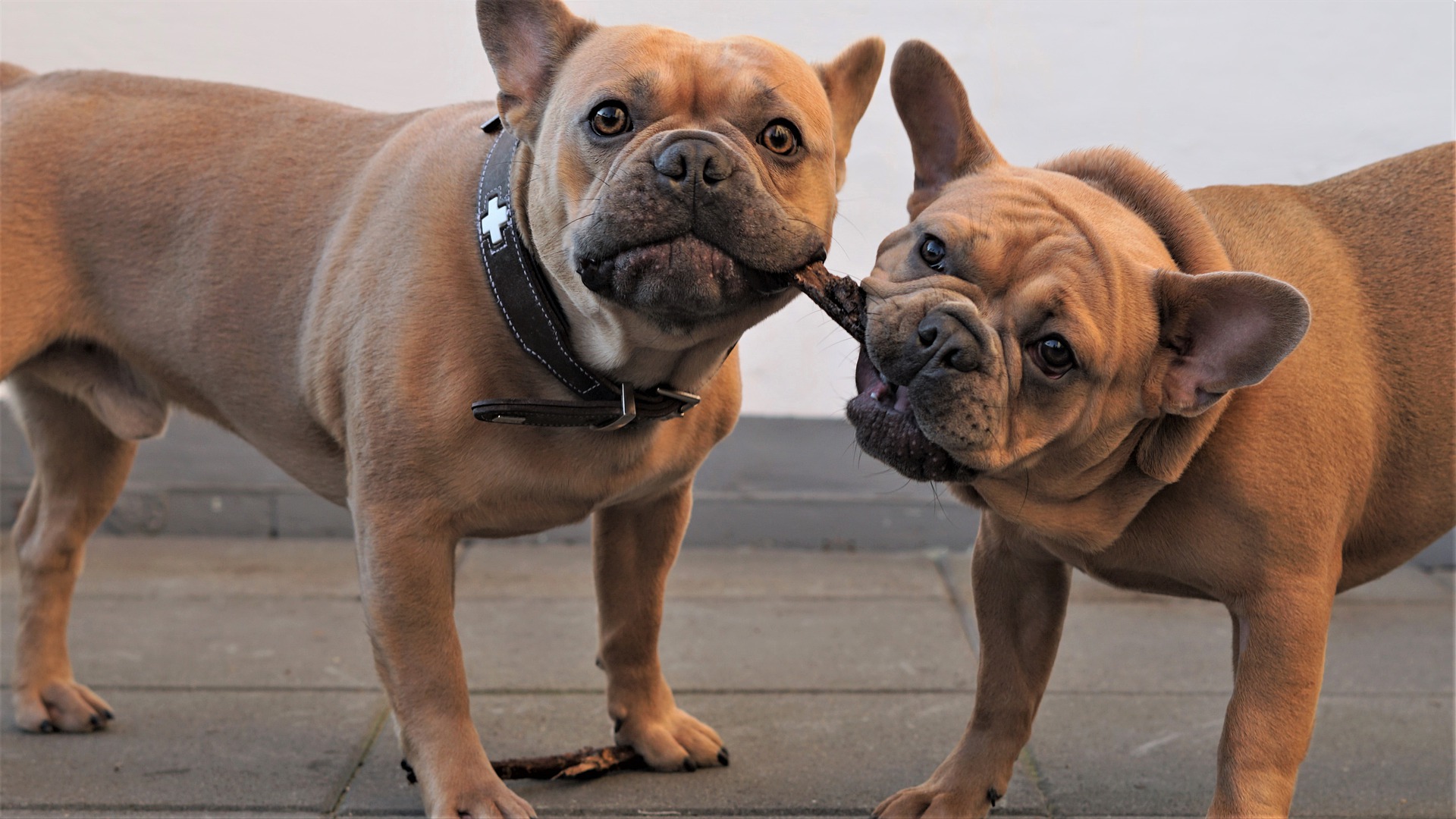 They are incredibly friendly and affectionate, especially around kids. They absolutely love being around children and will never leave a kid bored. You shouldn’t leave a young child unsupervised when with any dog for safety. They can be really funny dogs when they play and will always entertain the people around them. They are easy-going and sociable. They get on with other people and other animals really well, if you socialize them from a young age.

These canines will be very loyal to their owners as there is nobody they love more in the world, not even themselves.

These are very smart dogs, therefore they are generally easy to train. Some of them however can be quite stubborn. They work best with positive reinforcement (mainly with treats) and you must be firm and patient with this breed.

You should also try to keep training fun, make it like a game. This will make them more eager to do well and less stubborn as they will enjoy the training process more.

Start training your Frenchie socialization training when they are very young, otherwise, you will make it very difficult in future, or it won’t work at all.

Can a French Bulldog be a Service Dog?

Although these dogs are too small for some Service Dog jobs, they can make amazing Service Dogs, Companion Dogs, and Emotional Support Dogs.

A trained task for a French Bulldog Service Dog could be to retrieve items such as medication or a cell phone in an emergency, alert owners with hearing impairments of sounds, support people with PTSD or depression…etc.

If you want to train your Frenchie to be a Service Dog at home, check out our courses here at Service Dog Training School! 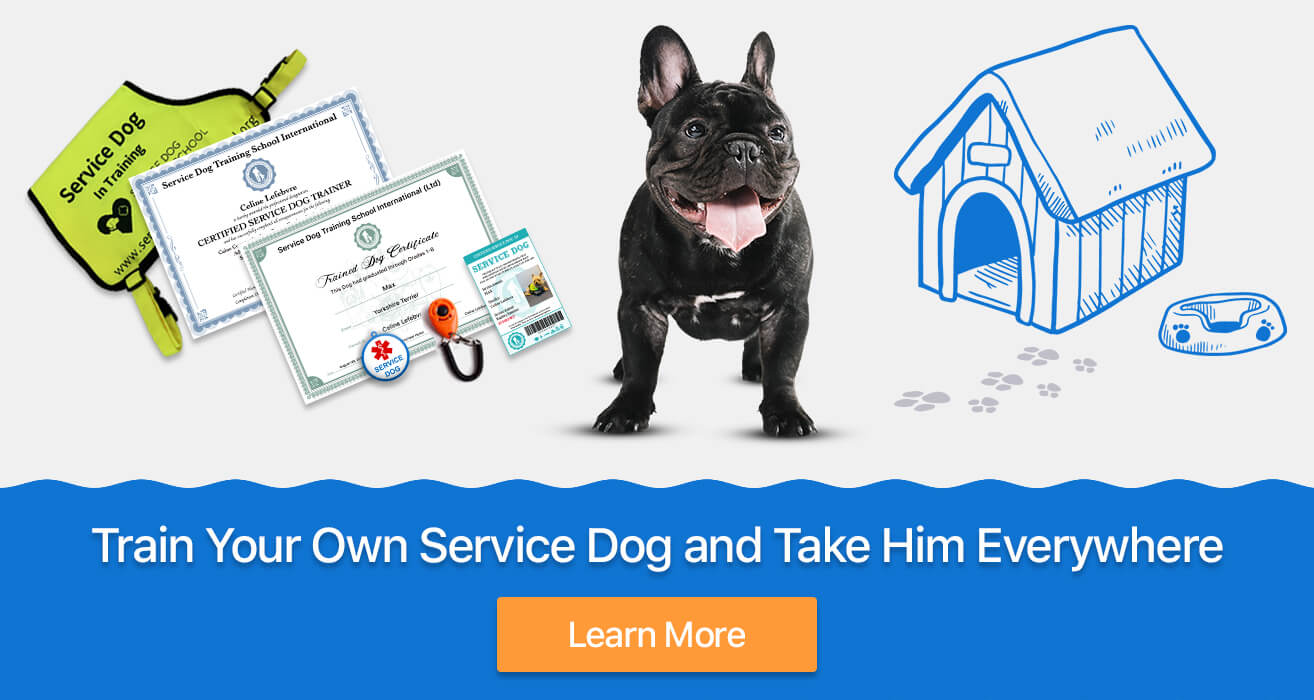 Unfortunately, this breed suffers from a lot of health issues. Before getting a French Bulldog, it is crucial you really research the common issues they can have so you are aware of them. Some of the health problems include:

• Ear Infections- this breed is very vulnerable to ear infections as they have a very narrow ear canal. Their ear glands can also swell up due to allergies, causing an overproduction of ear tissue, making the canal ever narrower, and inflamed. If you notice your dog has been scratching their ears a lot or showing signs of discomfort, get it checked out.

• Skin Problems- there are a few different types of skin issues with Frenchies, including Pyoderma and Skin Fold Dermatitis. Pyoderma occurs when your dog has suffered from a scratch or a cut and it has become infected. It can also occur in their folds. Signs include redness, pus, loss of hair around the area, itching, etc. Skin Fold Dermatitis mainly happens in the facial folds like around the nose and muzzle, but it can also happen in the armpits or their neck, etc. The signs are very similar to Pyoderma. To prevent this, clean the folds of your French Bulldog regularly and keep them free from moisture.

• Breathing Problems- there are also a few different breathing problems with Frenchies, including URT Infection and Brachycephalic Obstructive Airway Syndrome (BOAS). URT is almost like a common cold for French Bulldogs. It happens to all of them at least once in their life and it has a higher chance of happening if your dog spends a lot of time around other canines. Symptoms include coughing, lethargy, nasal congestion, etc. BOAS happens frequently in Frenchies because of their short noses and squashed faces. Symptoms are shortness of breath, sleeping problems, trouble breathing, and more.

• Mobility Issues- Conditions such as hip dysplasia and luxating patellas are quite common with Frenchies, as well as IVDD, spinal disc issues, and Degenerative Myelopathy (DM). These can cause a lot of discomfort with your dog and it’s important to check in with a vet regularly. 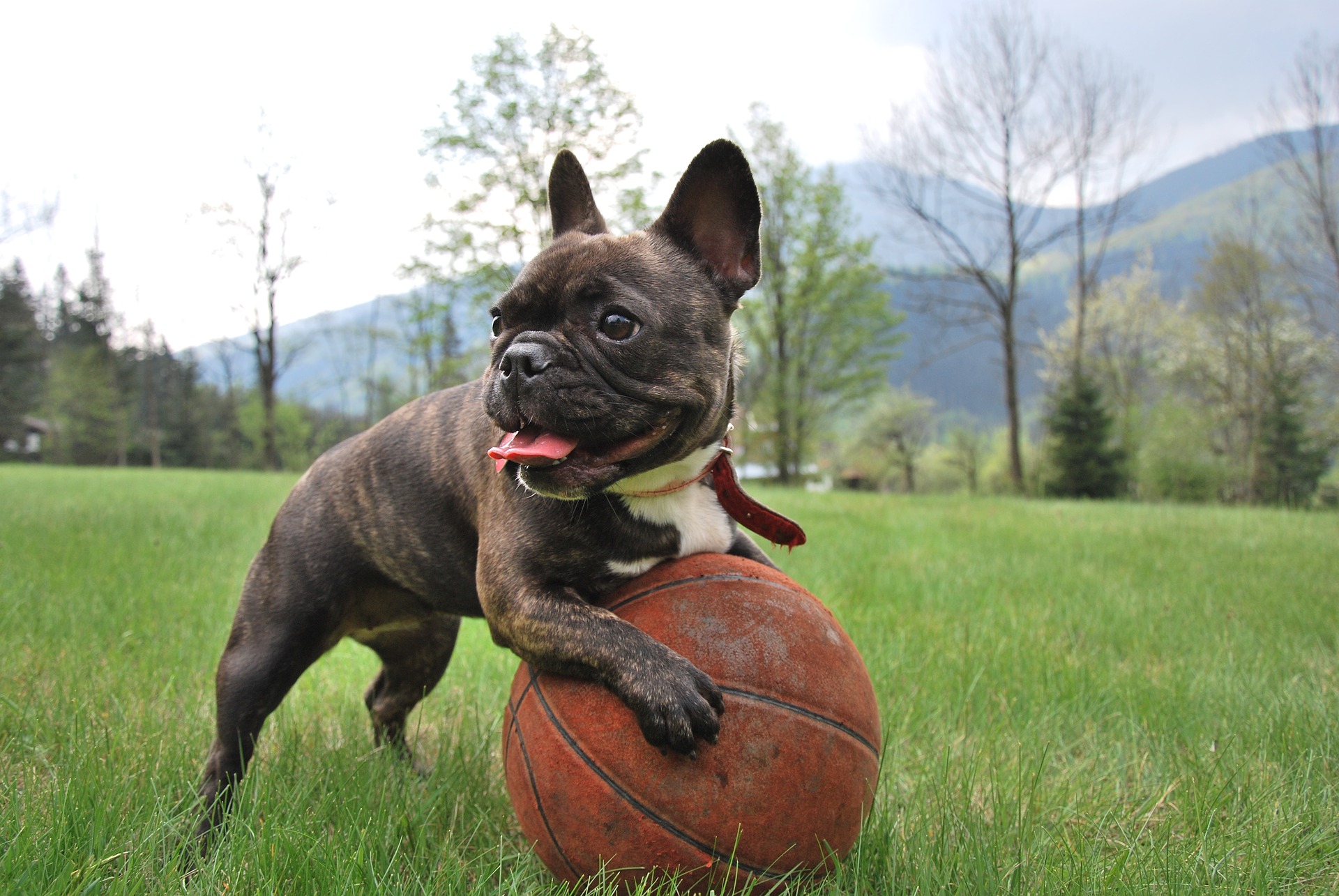 Caring for Your French Bulldog

Grooming– if a French Bulldog is not cleaned regularly and brushed regularly, you will have a stinky dog on your hands. Since their hair is so short and fine, they tend to shed a lot. This won’t be an issue really, but if you don’t keep on top of brushing, their hair could embed into the furniture or clothing.

They don’t need weekly baths but their hygiene should be closely cared for. When bathing them, be careful not to get their face wet. If water gets in their folds, it could cause an infection. Instead, use dog-friendly wipes in their folds. Be sure to keep an eye out for irritation when doing so!

Feeding– Frenchies don’t need a lot of food a day. Approximately 2 cups will be perfect, split into 2 meals a day. They are fairly low-energy dogs and are at risk of obesity, therefore if your dog is inactive you shouldn’t feed it as much as if it was active.

The Bernedoodle- What Do You Need To Know

German Shepherd As Service Dog – Everything You...